DO SOME PEOPLE ATTRACT LUCK?

… OR DOES LUCK ATTRACT CERTAIN PEOPLE?

To answer this vital question, let’s go and meet our lucky neighbour Werner Pichler, the fortunate director of The Ritz-Carlton Hotel de la Paix in Geneva.

Shall I introduce you?
This lofty Austrian loves packing and unpacking his bags so much that he’s made a job of it. Let’s take a closer look at the career of this hotel director unlike any other. Werner was born in rural Austria but as soon as he could, he set off to explore the world. After graduating, he left Mozart’s homeland and moved to Paris, Zurich, Munich, England, Dubai, Berlin, then the rest of the world and finally Geneva.

He started his career in marketing for luxury brands in the Marriott group. He then became international manager, working with almost 50 five-star hotels. On one of his many assignments, he discovered and literally fell in love with The Ritz-Carlton Hotel de la Paix in Geneva. It was the first time, he tells us, that he could see himself as the director of a single hotel.

He’d have to wait and see…
Don’t they say all good things come to those who wait? Well, four years later, he was offered the position of director at the Ritz-Carlton Hotel de la Paix. Did I mention luck? Within 24 hours, he’d accepted the job and was ready to rise to this new challenge, even if it meant spending some time away from his loved ones, who stayed in Berlin.

And where does luxury come into it?
When we ask him how he sees luxury and exclusivity, our dapper dandy quotes a promising young painter from the Renaissance. You might have heard of him – Michelangelo.
‘Simplicity is the purest form of refinement’.

‘When you think about it,’ he tells us, ‘all the hotels along Quai du Mont Blanc offer amazing service and that sets the standard for our guests – it’s simply what they expect’.

Because we’re the smallest hotel on the quay with 74 rooms and suites, our prime focus is on a close relationship and tailor-made service.

Every member of the hotel’s staff is thus encouraged to discretely take note of each guest’s tastes, interests and personality so they can receive extra special attention during their stay.

Let me give you an example. Recently, a young boy came with his parents for his birthday. They went out for the day but the lad had left his teddy bear behind. When he came back, he found a photo album illustrating all teddy’s adventures around the hotel. His eyes really lit up and it means his family will remember the unique experience they enjoyed in our hotel.

During the American Civil War, the British, who had difficulty coming to terms with their former American colonies’ independence, supplied military equipment to the secessionist south. A poor choice from the Brits – they’d backed the losing side. As a result, the USA asked for compensation from Her Majesty for failing to remain neutral. The bipartisan agreement was signed at Hotel de la Paix.

Later, in 1863, it was in the hotel’s bar – we’ll talk about the bar shortly – that the first version of the Geneva Convention was drafted, on the initiative of Henry Dunant.

So, would you like something to drink?
Yes please! So we head to the bar with the director, who is taking excellent care of us! ‘Welcome to FRED bar’. Along with Fiskebar, our Scandinavian restaurant, we needed to bring the hotel’s bar up-to-date.

Delighted to meet you, Fred!
The baroque watering hole is somewhat surrealist and was named FRED by Fiskebar in tribute to one of its most loyal patrons. Fred was apparently a Scandinavian aristocrat and bon vivant, who led an eccentric life.

One day, during a reception at the Swiss embassy in Copenhagen, he met a lovely girl from Geneva and fell head over heels in love.

“Our lovebird left the shores of the North Sea to settle beside Lake Geneva and devoted his life to art. Fred held all his professional – and other – appointments at the bar’s hotel. Then, one day, Fred disappeared and no one ever heard from him again.

A number of artists from the D10 Artspace agency have produced some astonishing pieces of work paying homage to our moustachioed baron from the frozen fjords.”

According to Werner, the answer to his mysterious disappearance lies in the artworks on show. The waiter comes and serves us an incredible selection of cocktails. I simply have to mention the MAED, a Viking-inspired concoction served in a goat horn that everyone has to mark with a sign originally made in … blood! But don’t panic – the blood has been replaced with a hygiene-approved sugar syrup. 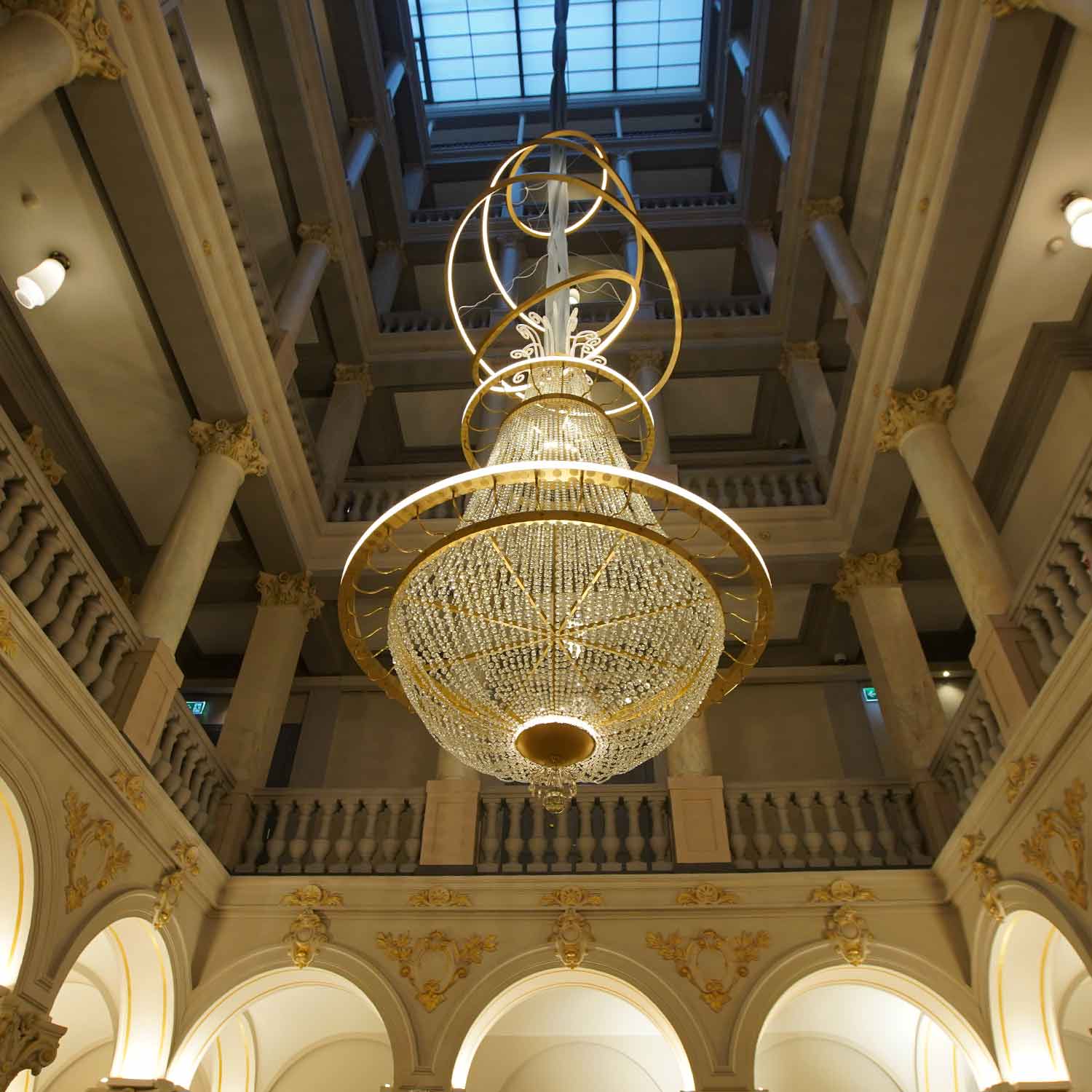 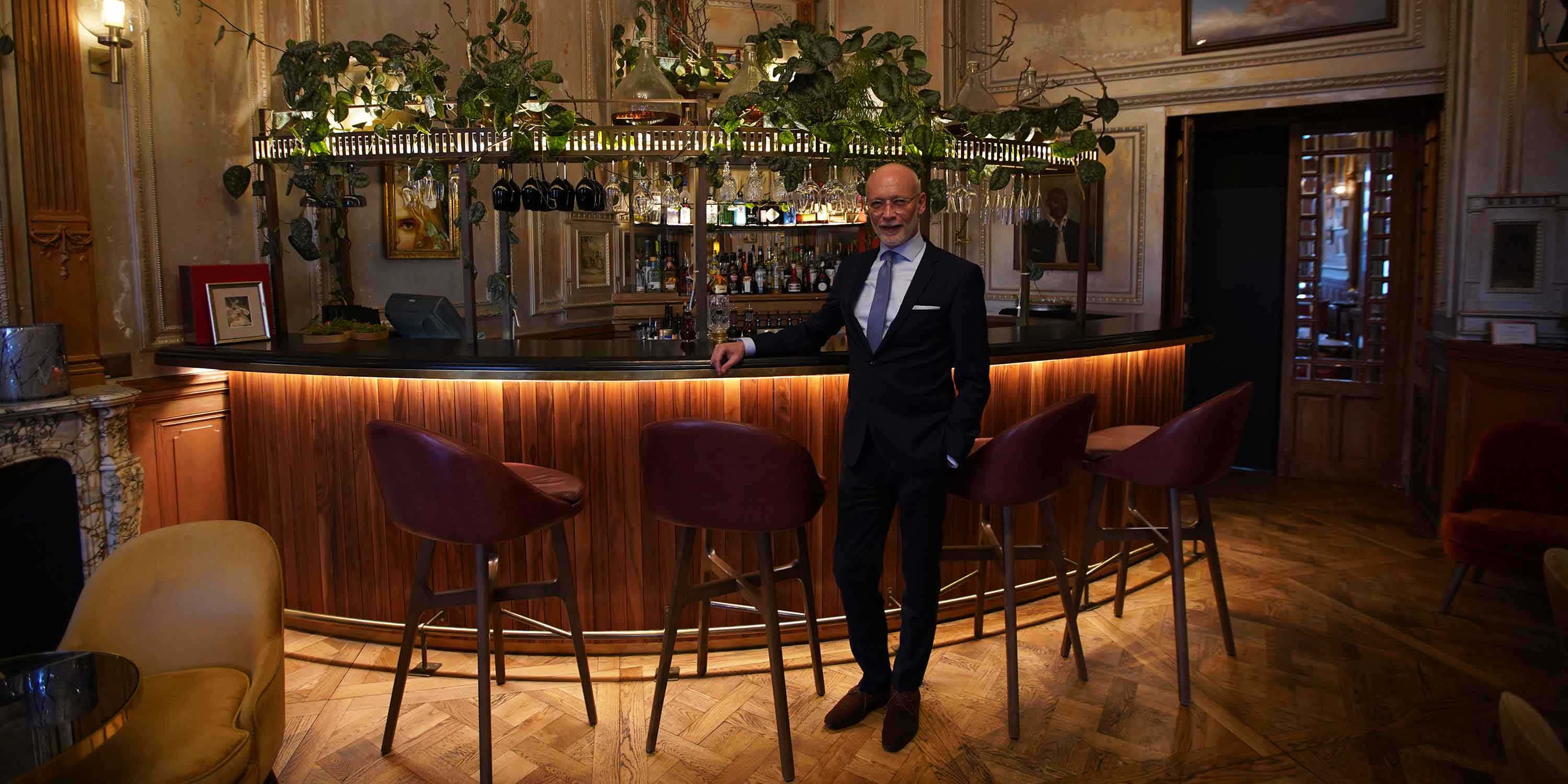 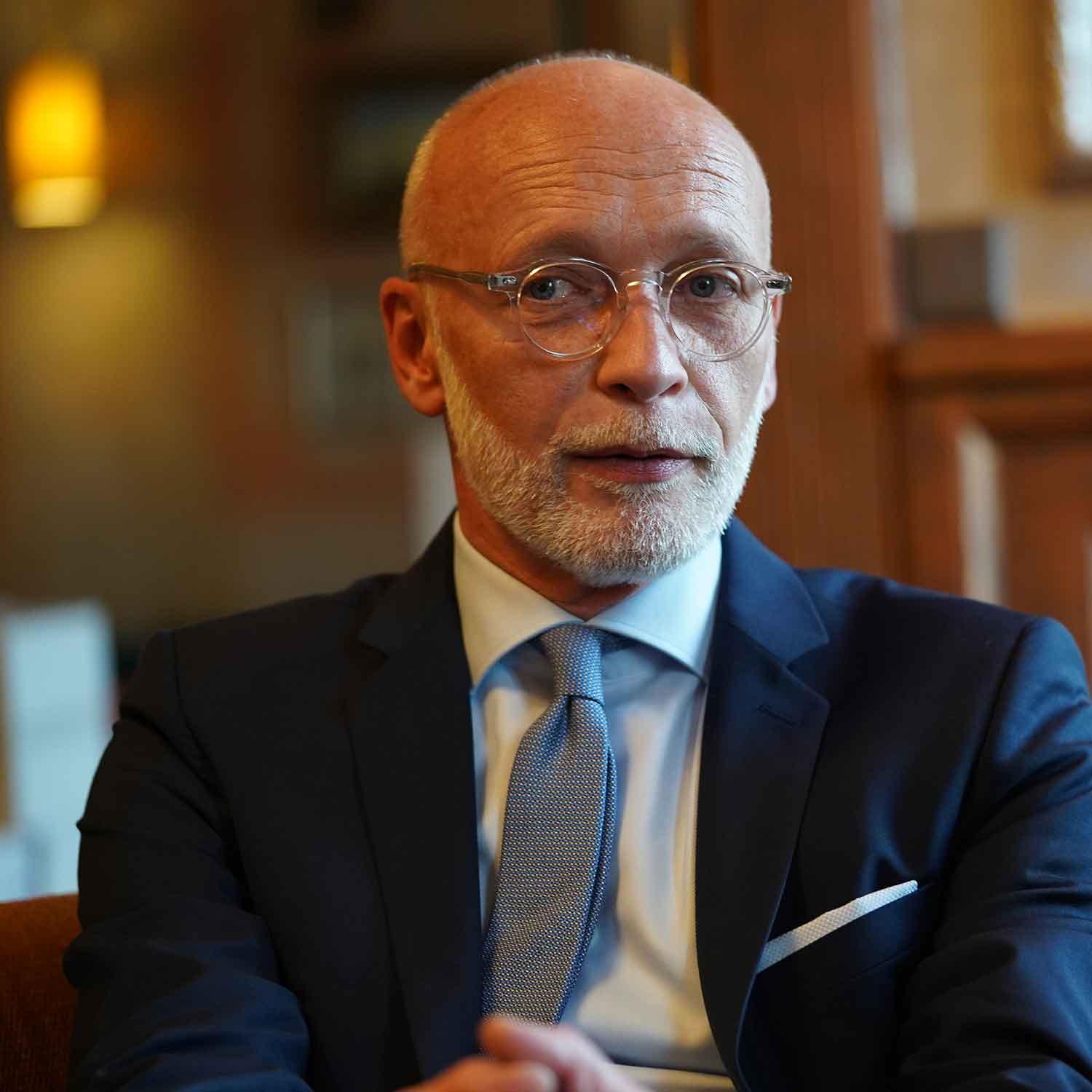 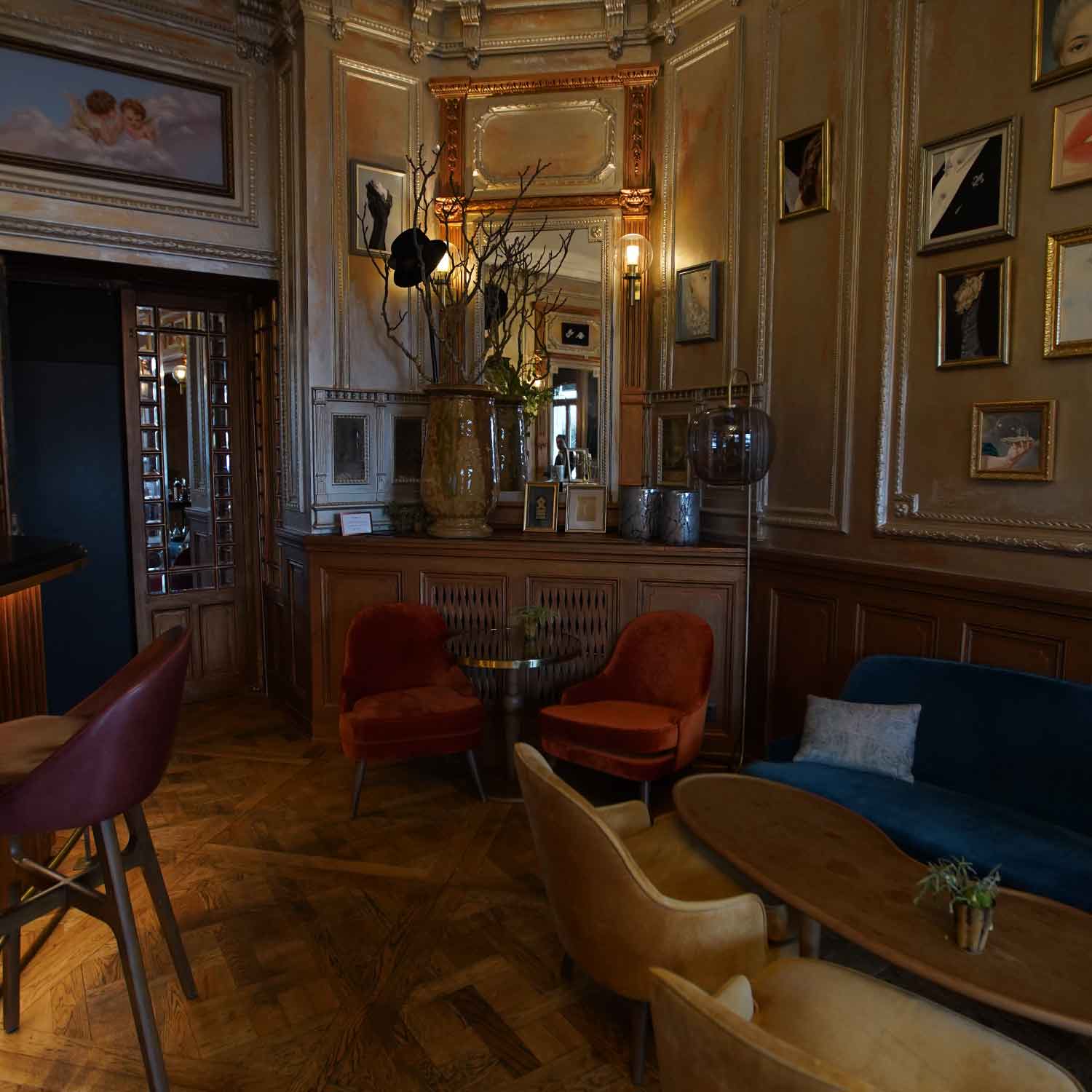 What last made you smile when out at the cinema or theatre?
At the Lycée Français theatre in Berlin, when my daughter was playing Juliet in Shakespeare’s play. It was amazing to see this delightful and dynamic young woman up on the stage. I was carrying her on my shoulders just a few years ago!”

The person that inspires you most?
Barack Obama. I was lucky enough to meet him in Berlin and we had a brief chat. He’s so cool and laid-back that you almost forget that he was president of the world’s biggest power. He’s also very attentive and sent me a gift wrapped in gold paper with the White House’s stamp, but I’ve never wanted to open it. The fact that he took the time to send me the gift is more valuable than what’s inside. People think I’m crazy when I tell them that story!

The first thing you look at when you meet someone?
Man or woman? [laughter]
I’d say their shoes, their eyes, their hands.

Shoes
A person who always wears a fine pair of shoes must have the kind of aesthetic and hedonistic approach to life that appeals to me!

Eyes
Because to me, it’s important to constantly maintain that visual link when talking to someone. You rarely get it wrong if you can read someone’s gaze.

Hands
I think that our hands say a lot about who we are, what we do in life, our sense of detail.”

Your biggest moment of madness?
I treated myself to a convertible right-hand drive Triumph Spitfire. It was extraordinary!
My biggest regret to date? I had to get rid of it when my first child was born. I think about it almost every day! [laughs]

A sunny spot to share with us?
I have two – I love the beauty of the Greek islands and their inhabitants’ kindness. But I have a really soft spot for Auvergne. It’s a beautiful French region, a secret, rural area like my part of Austria.
I’ve bought a 150-year-old stone house there and I like to go there to unwind. I like the simple pleasures you can enjoy in the countryside there, and the amazing sunsets.

Anything that you’ll regret about Geneva one day?
I would hate to think that the hotel hadn’t resumed its rightful place in the heart of the city and in the heart of its inhabitants. We’re happy to see that over 80% of the restaurant’s diners are local people.

I won’t miss these harsh, damp misting winters, but in summer it’s very different. The city, the mountains and the lake offer one of the finest vistas in Europe.”

Find out how we managed to get Marta, Richard, Yulia, Kristina and the others smiling again.